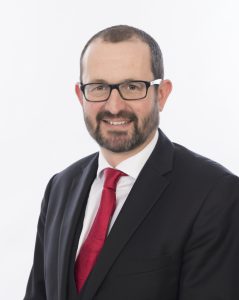 Richard is a founding director. He started his career with a large Isle of Man firm in 1991 and was called to the Manx (Isle of Man) Bar in 1995. A former partner in an Isle of Man legal practice, he set up his own firm in 2002 and merged this practice with Andrew Bridson in 2006.

Richard is recommended in The Legal 500 UK 2021 directory – “Richard is a real star. He is clever and focused. He wears it lightly with an amiable laid back style but is tenacious and cares greatly about his clients. I would trust him totally if ever I needed legal help in the Isle of Man”. He was formerly an associate at 4-5 Grays Inn Square London. Whilst predominately a civil lawyer Richard enjoys major criminal work and all types of advocacy. He is experienced in litigation at all levels of the Manx courts from the Privy Council, Staff of Government Division (the Appeal Division), the High Court, Court of General Gaol Delivery, Summary Courts, Coroners Inquests to Tribunals in areas as diverse as share purchase agreements, personal injury, estate disputes, matrimonial law, employment, health and safety, work permits and public enquiries. He has acted for successful claimants and respondents in unfair dismissal claims. He recently acted for an interested party in a 4 day contested licensing hearing the court accepting his arguments that the applicant did not satisfy the requirement of “fitness and character” for a licence despite being part of a well-known UK brand.

For the last 10 years, his practice has focused on commercial and international cross-border litigation including large Trust disputes. He has advised trustees and beneficiaries on various issues relating to their rights and obligations including inheritance family provision claims and challenges to the validity of wills. He has advised on doleance claims (Manx Judicial review). His most recent case is Quine v Department of Food Agriculture and Fisheries (2020) where he obtained an urgent injunction to prevent the suspension of the sea fishing licence of the claimants and then successfully brought a doleance claim which resulted in the quashing of the decision by DEFA to suspend the licence after the claimants had already been fined by the summary court. The case covers various judicial review principles, the issue of  double jeopardy and the applicability of the Human Rights Act to the case.

As a junior lawyer, Richard enjoyed extensive criminal practice undertaking a wide range of trials. As a senior advocate, he has acted in major criminal trials and appeals. Examples include successfully defending as leading counsel a principal contractor in an HSW prosecution following a fatal accident (two week jury trial) and then appearing at the inquest; representing a lawyer charged with money laundering offences (eventually acquitted on appeal to the Privy Council); acting for a professional director and MLRO charged with breaches of the AML Code in his capacity as director of a bitcoin company (prosecution offered no evidence during abuse of process hearing. Not guilty verdicts recorded); successfully defending a road worker charged with gross negligence manslaughter in respect of an accident on the TT course with allegations of inadequate signage; acting in a successful appeal against conviction in an international pharmaceutical prosecution.

With his extensive criminal experience, he is involved in advising on regulatory matters for local businesses. Much of this work is to help prevent businesses committing regulatory offences. He has advised in various criminal restraint matters including advising on discharge of orders.

He has represented professionals at disciplinary proceedings.

He has been involved in various successful mediations and always looks for the best option for his client whether it be negotiating a deal or contesting the matter at trial. He has been instructed by major firms of solicitors and worked with leading foreign lawyers. He enjoys working with experienced QCs as required.

Richard is former Treasurer for the Isle of Man Law Society and has sat on several committees of the Isle of Man Law Society including the Legislation and Education committees. He is a Notary Public. In his spare time, Richard is a Director of the Isle of Man Taekwondo Association which has involved him in various areas of international sports law including assisting former world number 1 ranked Olympic Taekwondo player, Aaron Cook. He has advised in various sports disputes. Richard is a 5th dan black belt and is an instructor with a local not-for-profit club.

Copyright © 2019 BridsonHalsall Advocates
Terms & Conditions
Privacy Notice
We use cookies to ensure that we give you the best experience on our website. If you continue to use this site we will assume that you are happy with it.Ok